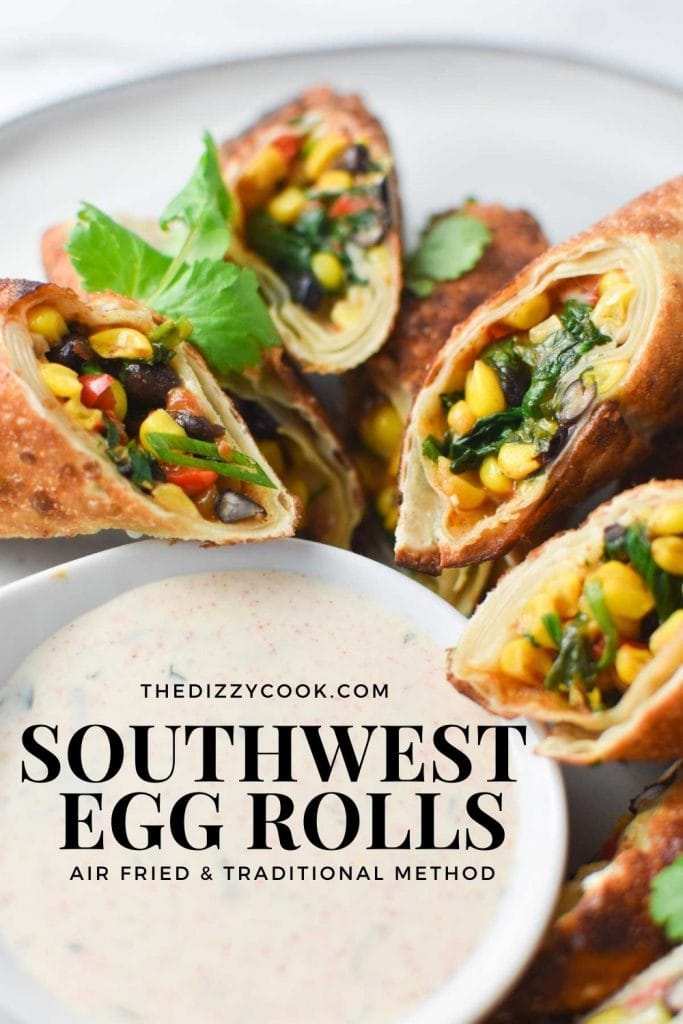 These air fryer southwest egg rolls are the vegetarian version of Chili’s famous appetizer. Crispy on the outside and filled with a mixture of spices and veggies, they’re perfect with my zesty ranch dipping sauce.

These bring back so many college memories for me. I don’t know about you, but in my college town (almost 20 years ago…my goodness) Chili’s was the hot date night place. And my favorite thing to order was the southwestern egg rolls. Then they came out with the triple dipper and I swear I would have gone on a date with just about anyone to get one of those.

I don’t know why it took me so long to try to recreate this, but I’ve been trying to think of fun ways to use my air fryer and this seemed like a good idea. However, I really wanted to test it both ways - the air fried and with the traditional fryer to see which one was better.

I’m pretty sure Chili’s uses chicken in their recipe, and you can, but I really didn’t miss it for these. They tasted pretty much exactly the same omitting them. And what’s nice too is if you left out the cheese, this is a completely vegan recipe. However, these vegetarian southwestern egg rolls hit the spot.

Add in some pantry spices and garlic and you’re ready to go. The Andrew and Everett white American cheese is such a great quality and melts very well. I know Boar’s Head has had some melting issues lately, but I think it’s been fixed. Some other good brands are Organic Valley, Horizon, and Land O Lakes. Definitely don’t go with the fake kinds.

Egg Rolls in an Air Fryer

I have the instant pot air fryer lid so that’s what I used for this recipe, but any air fryer will do. I really wanted to see if these would get just as crispy and good as traditional fried egg rolls.

The perfect method seemed to be to coat the egg roll wrapper with oil by brushing vegetable oil all over before placing it in the air fryer, preheated to 375 degrees F.

As they cool, they’ll crisp up even more!

As a comparison, I also fried some of these in vegetable oil on the stove. While they are more similar to the traditional southwestern egg rolls, both were just as crispy. In fact, I think the air fryer ones had slightly more crunch to them.

Both were delicious, so you really can’t go wrong either way. If you have an air fryer, save some calories and use it. If you don’t, try the traditional frying method.

What is the cook time for egg rolls in an air fryer?

About 13 minutes total, 8-9 minutes on the first side and 4 on the next. You want them to be golden brown. They'll crisp up as they cool.

Can I fry these egg rolls in oil instead of using an air fryer?

Yes, they only take about 1-2 minutes per side to fry in vegetable oil.

Does it matter what air fryer I use for this recipe?

No, but I used an Instant Pot Air Fryer Lid, which only fits a few in at a time. A larger air fryer can cook more egg rolls faster.

Can I make these Southwestern Egg Rolls vegan?

Yes! Just leave out the cheese. They will still be delicious and flavorful.

What dipping sauce is best?

I would recommend using the Southwestern Ranch recipe from my cookbook (pg70), the Creamy Cilantro Sauce, or this traditional Ranch.

Probably the most challenging part of this whole recipe is wrapping the egg roll but once you get the hang of it, it becomes rather simple.

These southwestern egg rolls reheat extremely well in the oven, no matter how you fried them. From the fridge, I baked them at 350 degrees F for about 15 minutes and then let them cool.

You can freeze these by wrapping them in cling wrap and then storing them in a freezer safe bag. If you individually wrap them, there is less chance they'll stick together in the freezing process.

To reheat these from frozen in the air fryer, cook at 350 degrees F for about 5 minutes per side.

For other appetizers that are vegetarian, check out these recipes:

If you make this recipe, don’t forget to tag me #thedizzycook or @thedizzycook on Facebook and Instagram. And please leave a review below! 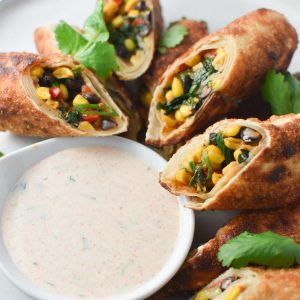