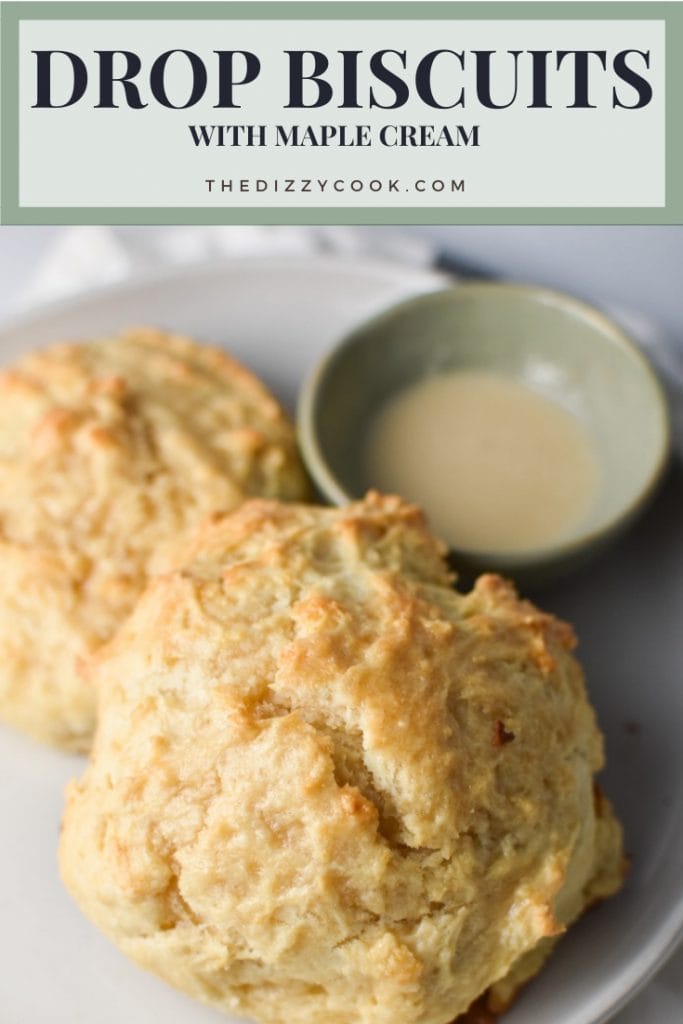 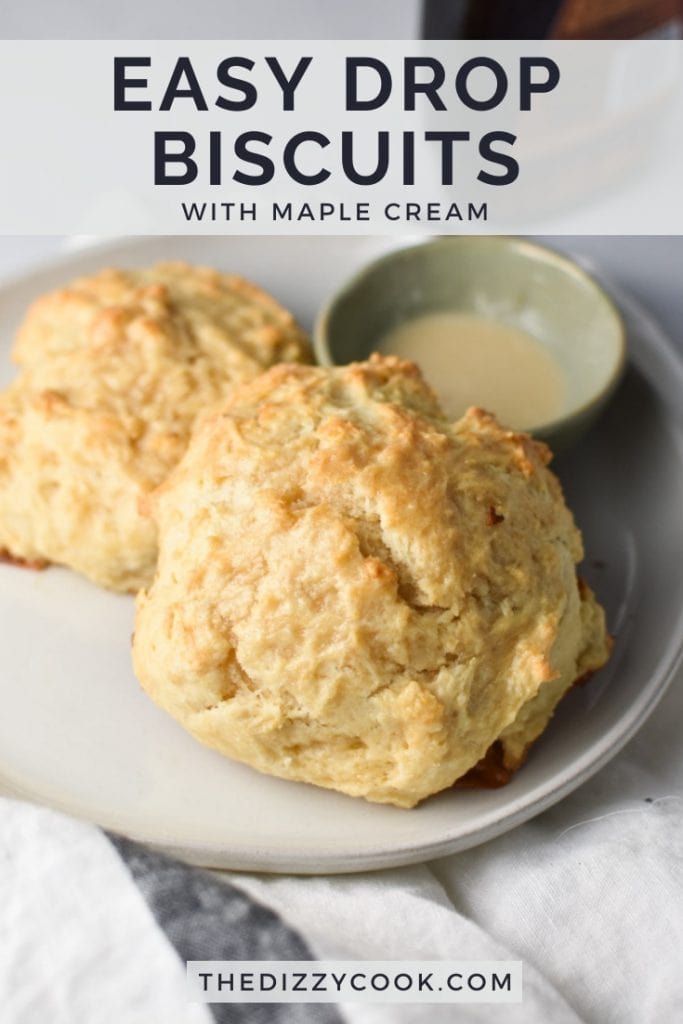 These drop biscuits with maple cream, inspired by Chrissy Teigen’s biscuits and gravy recipe, are so unbelievably easy to make and don’t require buttermilk. The maple glaze gives these buttery biscuits the perfect amount of sweetness to balance out the salty-savory flavor. 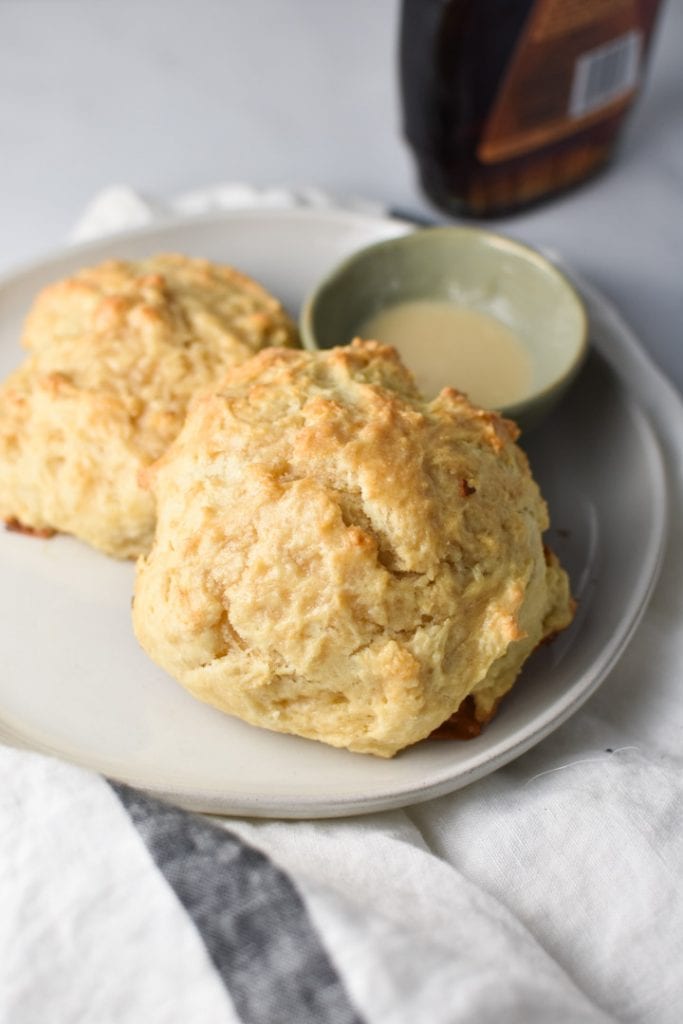 Often it’s difficult to find really good biscuit recipes without buttermilk. Buttermilk, which is basically cultured milk is often on migraine diet lists for the fermentation factor. If you’re sensitive to yogurt, like I am, you could also find that buttermilk is trigger. This is probably why a biscuit recipe was the most requested recipe when I did my online book tour! It’s also one of the recipes I wanted to do for my cookbook, but it always seemed like one of those things that could never be done.

Buttermilk is often used in biscuits for its acidity, which helps the dough rise when combined with  a leavener. This is why you often see it combined with baking soda and baking powder in recipes. It also adds a distinct flavor.

My method of replacement in this recipe is nothing new, but an old substitution used by people for years. 1 cup of milk combined with 1 tablespoon of distilled white vinegar allows you to achieve this acidity and the flavor (somewhat) but still migraine-friendly. 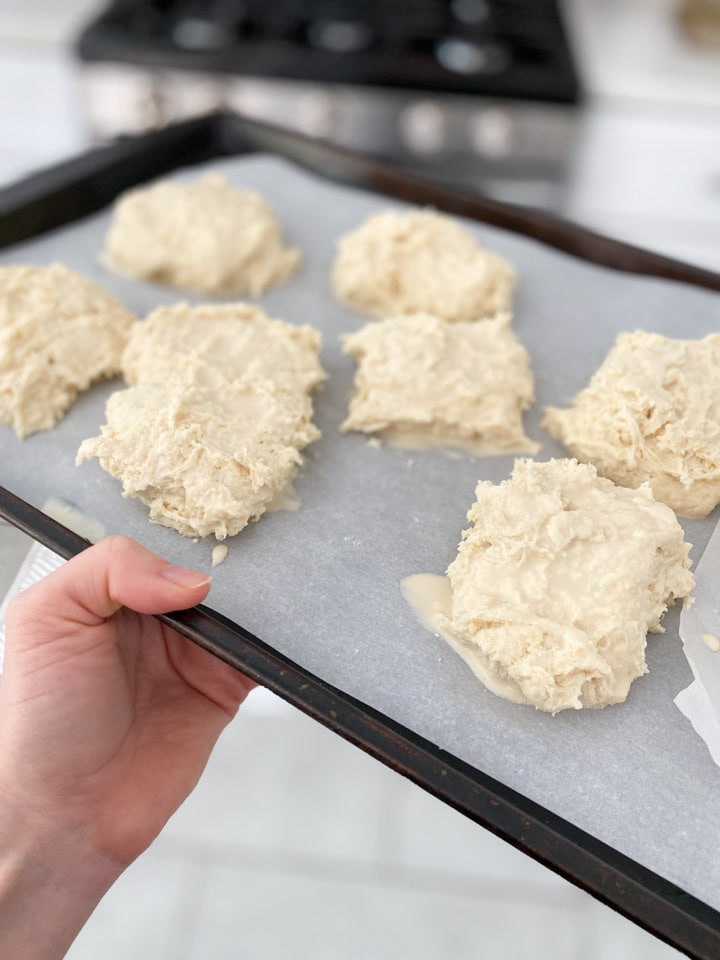 What is a Drop Biscuit?

A big reason why I loved these is they didn’t require any rolling out or cutting them into perfect rounds, which is a big benefit to drop biscuits. You basically just scoop the dough out and drop it on a baking sheet.

The way Chrissy Teigen makes them in Cravings, you arrange them close together so that they’re almost touching, this way when they bake they puff up and form a “pull-apart” biscuit. I ended up separating mine a little bit more so they didn’t quite run into each other, making them more like drop biscuits. The only difference is I wanted these a little bit larger than what I had a scoop for, so I spread it on a board dusted with flour and tried to cut into fairly even squares. But feel free to use a large scoop and just do it straight from the bowl.

Drop biscuits are basically for people who want their biscuits now now now (aren’t we all this way early in the morning?) without all that rolling and cutting. They’re kinda crunchy on the outside and soft on the inside. 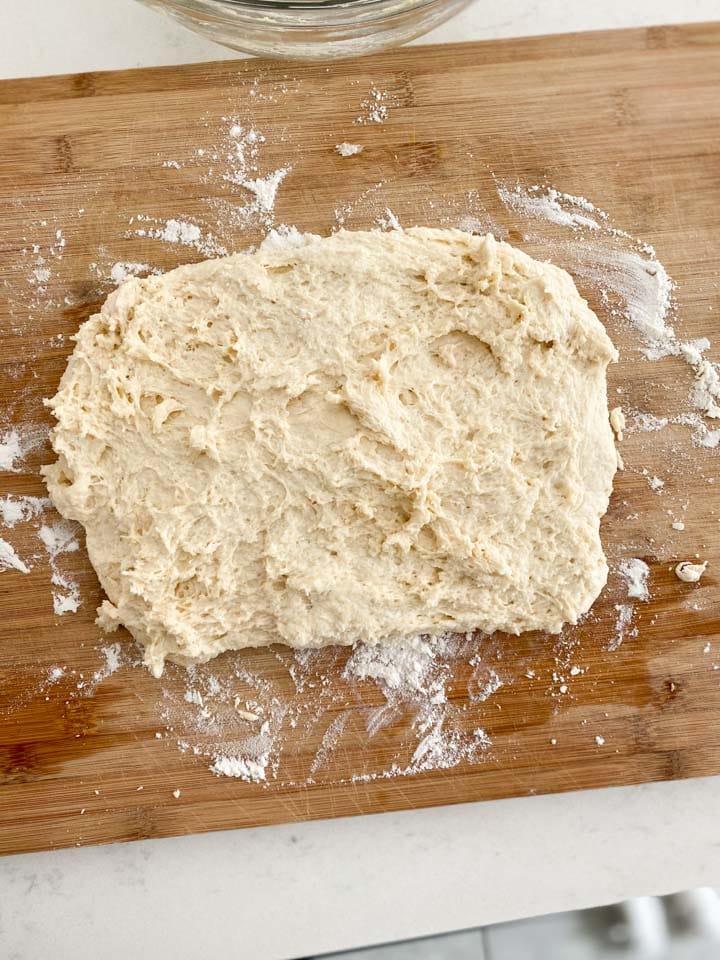 Technically you don’t have to mix it out like this…only if you want them to be in large, even pieces and don’t have a large scoop to do it OR if you want to use Chrissy’s pull apart method. 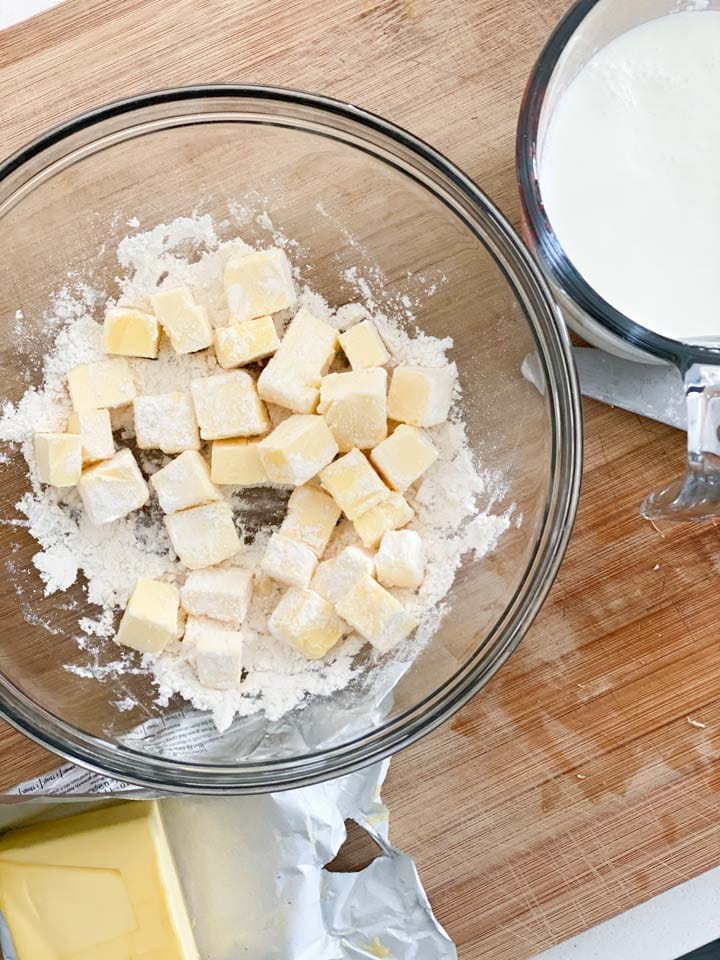 Some Tips for Drop Biscuits

Here’s a recipe that is both gluten free and can be made vegan as well. At this time, I cannot recommend a migraine-friendly vegan alternative to butter. All contain natural flavoring, which can be a form of MSG considering it’s a savory flavor you’re creating. That being said, I know some that have a favorite that they can tolerate well. 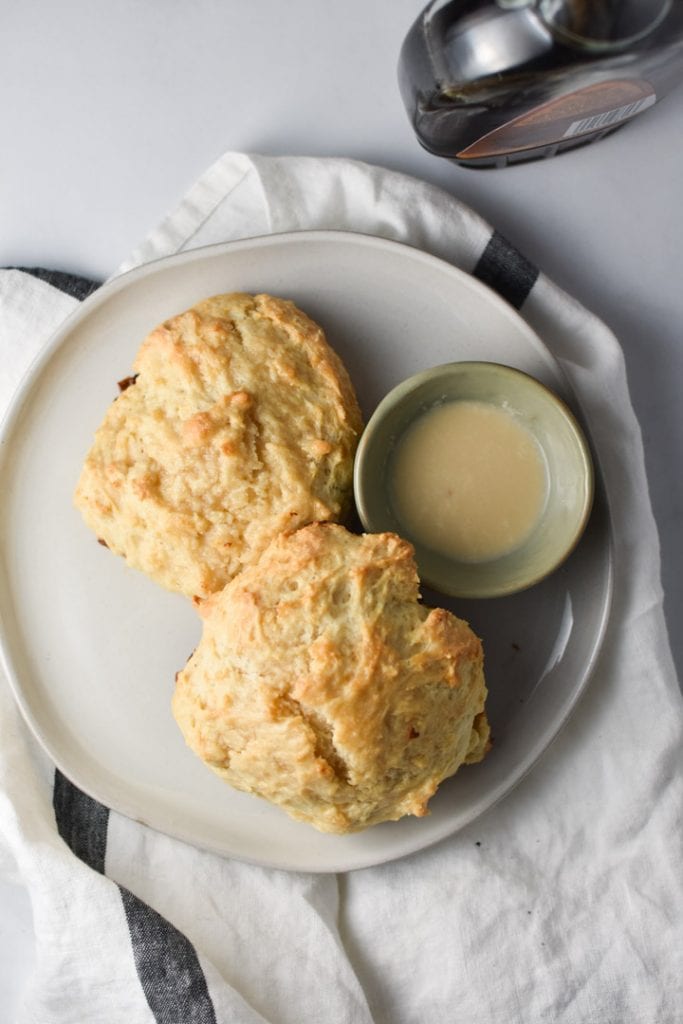 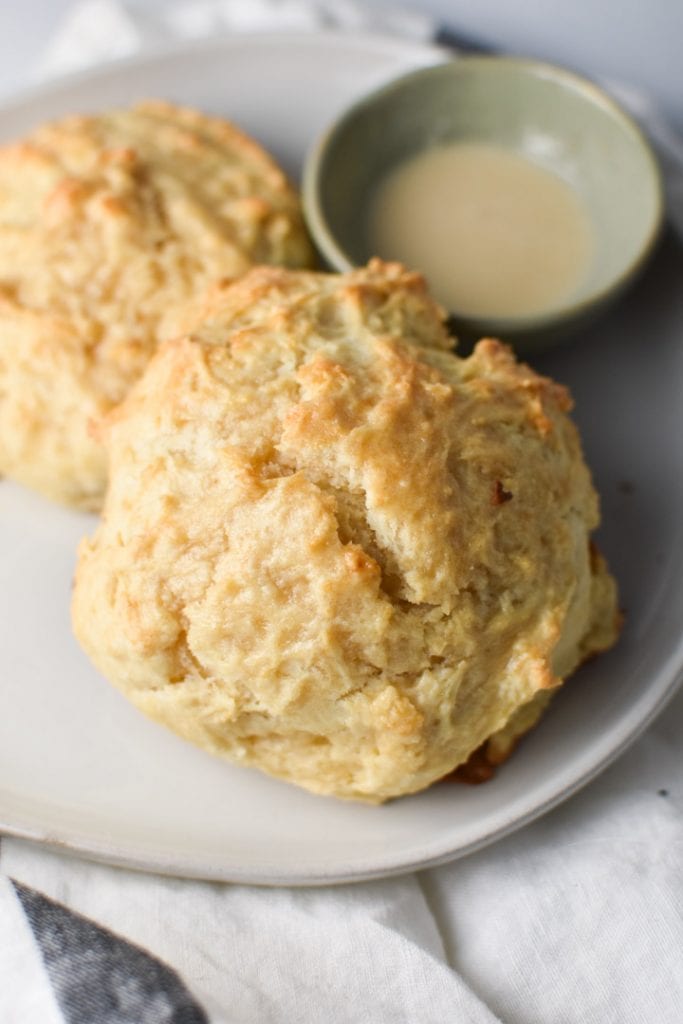 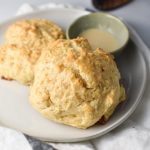 These quick drop biscuits with maple cream, inspired by Chrissy Teigen’s biscuits and gravy recipe, are so unbelievably easy to make and don’t require buttermilk.