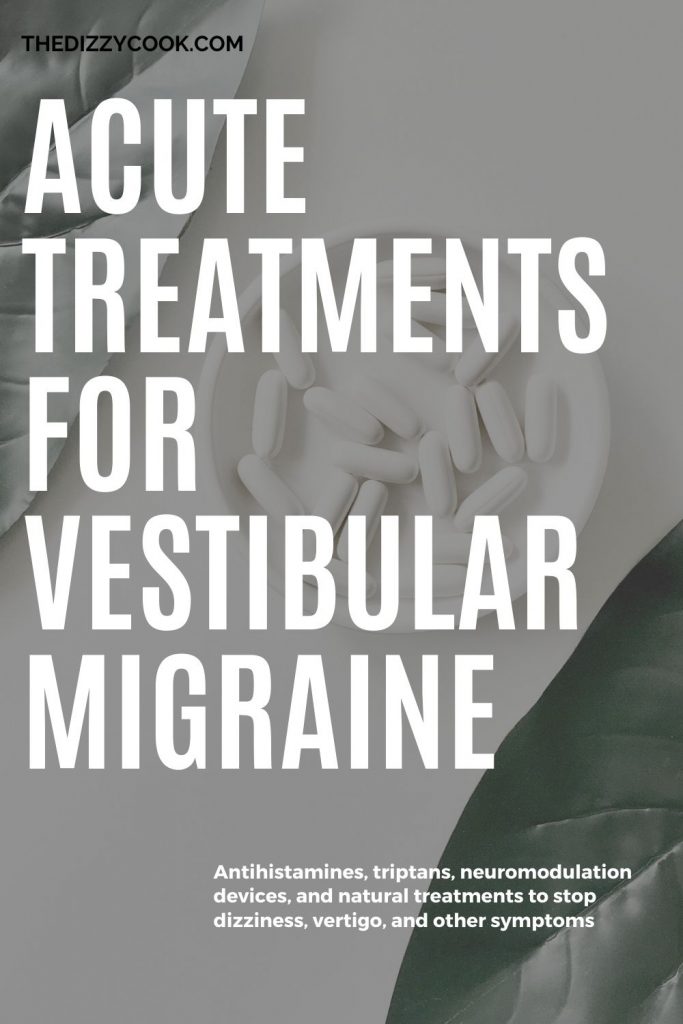 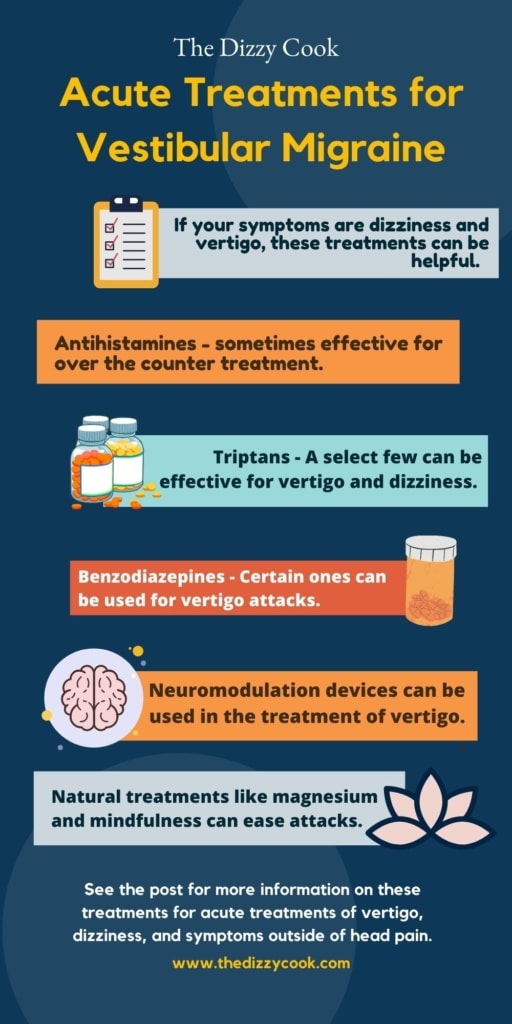 Vestibular migraine can produce daily dizziness, but also can occur with episodic, disabling attacks. This fluctuation in symptoms can be stabilized by using preventative medications, which work to prevent attacks before they happen. But as people living with migraine know, occasionally some attacks slip through and we’re left scrambling to get rid of them as quickly as they came on. This is where acute migraine treatments come in.

When used either at the first sign of symptoms or in the midst of a full blown attack, these acute vestibular migraine treatments can either help to completely stop the symptoms or lessen the severity of the attack.

For typical migraine attacks that involve head pain, these are usually analgesics like naproxen (Aleve), ibuprofen, acetaminophen, triptans (migraine specific pain meds), and ergotamines. But what do you take if you don't get head pain with your migraine attacks? Don't worry, you have options!

These can include (but are not limited to):

If none of these sensations cause pain, but are just are terrifying and debilitating in their own way, how do we stop them? Here are a few new and existing vestibular migraine treatments that can be used acutely.

Up until recently, I truly believed the only effective acute medications for vestibular migraine that existed were benzodiazepines and antihistamines like meclizine. It was previously thought that triptans were ineffective against vertigo, and only worked for migraines with head pain. However, some small studies show a little bit of success. Two randomized trials showed a little bit of evidence supporting the use of rizatriptan and zolmitriptan for vestibular migraine attacks.

In one of the studies rizatriptan showed some promise in 15 subjects who experienced motion sickness due to vestibular issues. 13 of the 15 showed a decrease in motion sickness after taking the rizatriptan, compared to the placebo. However, with an increase in stimulation, the patients did not receive a continued benefit. This seems to be one of the most prescribed triptans for people with vestibular migraine.

In another small study, zolmitriptan showed some benefit in a dosage of 5mg, proving useful in 3 out of 8 vestibular migraine attacks. However, the placebo group showed benefit in 2 out of 9 attacks.

Again, both these studies are limited because of the amount of participants, but when looking at Vestibular Migraine as a whole, there are really only a few small studies to go off in general. This type of treatment is something Dr. Beh is tending to prescribe more, as mentioned in our interview.

Medically these are referred to as meclizine, dimenhydrinate, and diphenhydramine. You may know these are Antivert, Dramamine, and Benadryl because as mixed antihistamine/anticholinergics they are commonly the go-to for doctors to prescribe when patients mention vertigo episodes. These are vestibular suppressants, not meant to be used for prevention, but can be used acutely and are found over-the-counter making them easy to access without a prescription.

These are always kind of glazed over when talking about vestibular migraine, especially in studies. It seems because they are widely known and tend to help with motion sickness, they’re often recommended.

However, antihistamines for migraine may not be the most effective treatment you can find. I personally see these as an easy place to start, but don’t be discouraged if you don’t see a huge benefit for stopping a severe vestibular migraine attack. The other commonly reported drawback is they can be sedating.

Benzos like Ativan (Lorazepam), Valium (Diazepam), and Klonopin (Clonazepam) can be used in the lowest dosages for acute treatment vestibular migraine attacks. In my interview with Dr. Beh, we discussed how these aren’t always the first protocol for attacks, but they can be effective for people who aren’t helped by other methods like antihistamines or non-pharmacological treatments.

Dr. Beh mentioned these tend to be useful for patients who also experience increased anxiety with their attacks. Dr. Timothy Hain shares a stepped vertigo protocol where he begins with Meclizine before transitioning into certain benzodiazepines. He states certain benzos tend to be less sedating but have an increase in dependency. Some are not prescribed due to their high risk of dependency, such as Xanax (alprazolam).

As discussed in this post on managing migrainous vertigo attacks, the use for these can be controversial due to addiction. This is something Dr. Hain has visited previously on his site, in which he says the risk can be decreased by staying with the lowest possible doses and taking as prescribed. Compensation should not be a concern on these low doses.

For me, Ativan for vertigo attacks was extremely effective and still is to this day. These days I just take as needed for dizziness, but when I was ready to wean off daily treatment, I had no issue at the low dose I was taking. You can review my treatment plan with all the details.

Something I talk about often as it was part of my own vestibular migraine treatments, is Timolol Eye Drops. Most commonly used for glaucoma patients, these eye drops are basically a lower dosage of beta blockers, which have shown success for migraine prevention.

The interesting twist is that because these can be administered through the eyes or as a nasal spray, the medication is absorbed much faster into the blood stream than taking an actual pill.

No studies have shown the success with this medication and vestibular migraine specifically.

One exciting and recent study, published by Dr. Shin Beh and Dr. Deborah Friedman, reviewed the benefits of nVNS (which stands for noninvasive vagus nerve stimulation) as an acute treatment for vestibular migraine.

Your vagus nerve (which is pronounced “Vegas nerve” although I sometimes have a really difficult time saying that when it just sounds like a nerve that likes to party), basically connects your gut to your brain. So naturally it makes sense that with a type of migraine that can affect our gut so much, a stimulation device for it makes sense.

The study tested 18 patients, 14 with a VM attack, and found that vertigo was reduced in 13 or the 14 patients. 4 patients with PPPD were also tested and found no improvement.

This nVNS device is also known as gammaCore and can be used at home. It is available as both a preventative and acute treatment. It used to cost $600 a month, but the pricing has been reduced to make it more affordable. If your doctor is a part of a hospital research program, the cost is $150 a month for 3 months of treatment, or you can get a similar discount with my code.

I've always wanted to try this device and it worked out to test it during my postpartum phase when I was struggling with more vestibular migraine attacks due to lack of sleep. I found it to not only be helpful to reduce dizziness, nausea, and head pain (something new for me after IVF and pregnancy with migraine), but also to help bring down my anxiety. The best part was that I could use it as an acute treatment without it compromising my mental clarity or driving ability, like many medications do.

Each stimulation is 2 minutes and feels like a gentle buzz. Each session is usually 2 stimulations on the same side for a total of 4 minutes. With gammaCore you rent the device for 3 months at a time.

I share my journey with using gammaCore as a migraine treatment, so don't miss out if you're interested. Use my code dizzycook for 15% off your gammaCore device, available online through their website portal, Vytal.

Another neuromodulation device that’s being used within my clinic is the Cefaly. This device stimulates the trigeminal nerve instead of the vagus nerve, so it’s placed on the forehead rather than the neck. Typically this stimulation is beneficial for those with any kind of head pain or sinus pressure.

Cefaly Dual comes with two settings, an acute and preventative setting. The total cost is $499, and then you purchase the electrodes which have about 10-20 uses. You can also purchase the devices separately (for preventative and acute treatment) for a discount if you only want to use it for one or the other. Once purchased, you own the device.

Sessions are comprised with 20 and 60 minute sessions, but it sticks to your forehead so you can move around with it.

Cefaly has recently been studied for vestibular migraine attacks, and my neurologist has recommended it to me as another good option.

I have yet to try Cefaly outside of my doctors office because I'm really well managed with my current treatments. Should I have an increase in attacks in the future, I'd be willing to order one. They do give you a 60 day trial period to see if you like it. Get 15% off Cefaly with code dizzycook.

I have not personally tried any of the new gepants for vestibular migraine, but they are becoming popular because they do not have the risk of rebound like triptans. These work by inhibiting CGRP, which is responsible for head pain signaling in the brain. Generally relief is felt within 2 hours.

Nurtec (rimegepant) is a tablet that has been approved for both the acute treatment and preventative treatment of migraine. Studies have shown it's been helpful for light sensitivity, sound sensitivity and nausea, which can be common with vestibular migraine attacks. There's really no information on Nurtec for vertigo specifically.

While I've heard mixed reviews from vestibular migraine friends, just like any of these treatments it's worth a try! Although Ubrelvy and Reyvow fall into the same category, Nurtec seems to be the most popularly prescribed for vestibular migraine specifically.

Some acute vestibular migraine treatments at home that you may already have on hand include:

I know the last one is really difficult - everyone tells us to do this, but it is easier said than done. But truly this can look different for every individual. For me, I had to make a really tough decision to leave my old job as all my other stress relief tactics weren't enough. You know it's probably an issue when your neurologist, nurse practitioner, family, husband, and therapist are all telling you to quit your job.

I also added in massage therapy every two weeks as a scheduled appointment. Financially, it's expensive, but my mental health (and neck) benefitted a ton from this investment. Overall, I believe we know what works best for us, it's just sometimes doing it that's the difficult part.

I hope this post gives you some great ideas to discuss with your physician regarding acute vestibular migraine and vertigo treatments.