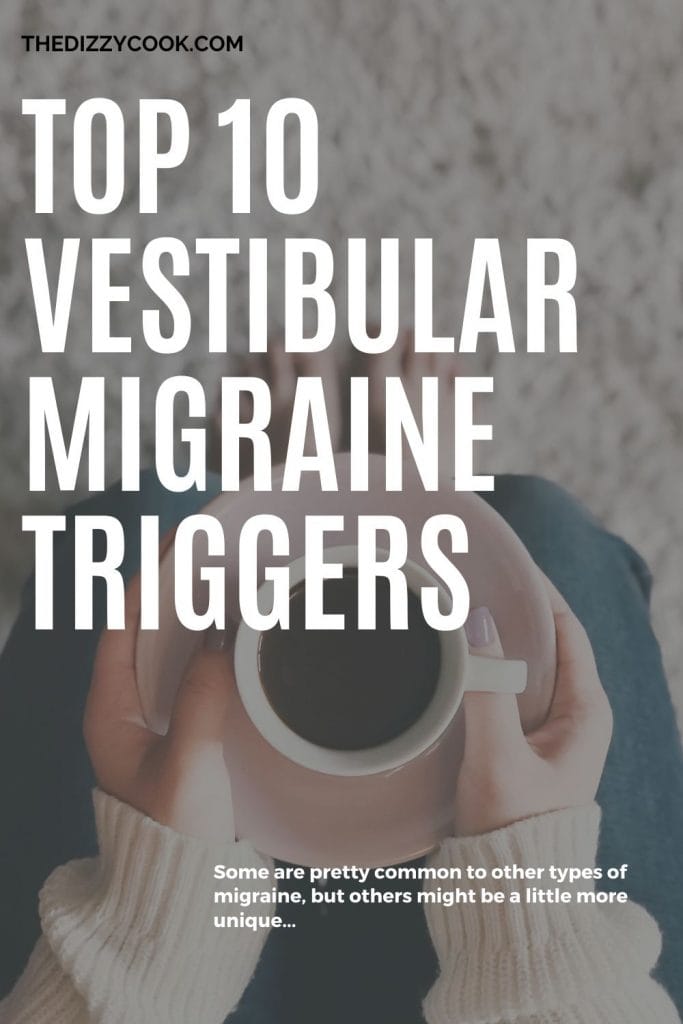 What are vestibular migraine triggers? Basically they're occurrences that either heighten existing symptoms, like going from background dizziness to vertigo, or start symptoms when you were previously feeling good.

My Journey with Vestibular Migraine

When my symptoms were 24/7, just 4 years ago, it seemed like everything was a vestibular migraine trigger for me. This time of year truly reminds me of how bad I was just a few years ago. I believe it was this month that I was rushed to the ER with a vertigo attack, convinced I had a brain tumor, only to be sent home with meclizine and a “good luck”.

As I finally received a diagnosis of vestibular migraine (and actually accepted it), I began my path to healing. Throughout this journey I’ve learned so many things, and my treatment plan has also changed over the years. I started off with medications that I’ve since weaned off of. I’ve re-introduced foods I once eliminated on a migraine diet. And my vestibular therapy went from specific exercises in a clinic, to taking HIIT classes and ballet on my own time.

My improvements certainly didn’t happen overnight, and neither did discovering exactly what my triggers were. In fact, some of them took me years to truly figure out and that was only after my brain had a chance to calm down with the combination of medications, diet, and supplements I was doing.

Still, there are a few common vestibular migraine triggers to watch out for that I see often in groups or that happen to me.

Now these aren't the only triggers that exist, but they're some of the more common ones that I have personally experienced.

Not only are all the lights bright fluorescent and sometimes flickering (the worst!), but the rows mixed with different patterns of products can leave your vision feeling all kinds of wonky. Not to mention if it’s crowded with other people, it can be difficult to dodge them with your cart while keeping yourself up right.

In the past if someone bumped into me, it would totally throw me off my center of gravity. The one good thing was holding onto the shopping cart, which kept me stable and a little more centered.

One thing I hated the most was the "sticks" on the HOV lane in Dallas. As I passed by them in the car quickly, they created the most painful visual trigger. Sometimes the sun flickering through trees as we move in the car (or on a path) tends to bother me. Subway or train rides can give me vertigo if I watch the other trains pass in the opposite direction. Long flights or car rides tend to leave me feeling like I’m walking on marshmallows or still moving.

Some people with MDDS (Mal de Debarquement syndrome) actually find they feel better in motion, but most I talk to with vestibular migraine tend to be triggered by it. This could even apply to exercise. Certain exercises, like yoga with a lot of sun salutations, always made me more dizzy and increased the pressure in my head.

Do you feel as though you can predict the storm patterns if your area better than the weathermen? You’re not alone! Whenever storms are about to roll through, even sometimes a day before, my friend Kayla and I text each other. We can always tell when the weather is about to change. Often it’s worse during storms with lightening, but sometimes it can be from cold fronts or seasonal changes.

Another thing that gets me? Heat and humidity. There was even a study that showed low barometric pressure and higher temperature led to an increase in ER visits for migraine attacks.

Perhaps you’re not sleeping through the night and making up for it by napping during the day. Or maybe you’re sleeping in more and staying up late on weekends to try to switch back during the week. These changes in sleep schedule, although we often don’t think much of them, can trigger attacks for some people.

Even grinding of teeth could be triggering attacks if you are experiencing jaw pain in the mornings.

In my interview with Dr. Shin Beh, Vestibular Neurologist and founding Director of UT Southwestern’s Vestibular Neurology and Neuro-Visual Disorders Clinic, stress was the number one trigger he saw with his patients. Often many of us can pinpoint the start of our vestibular symptoms to a particularly stressful period in our lives. For me, mine was my former job.

But stress can be a part of everyday life, so it seems to be one of the most difficult vestibular migraine triggers to control.

From using hormonal birth control to spikes around ovulation and before or around our periods, women are prone to hormonal triggers throughout their lifetime. Pregnancy and menopause can either provide a welcomed relief or a spike in symptoms, but every woman is different. Some get relief from using birth control while others are triggered by it.

My neurologist and OB say for pregnancy, there’s a rule of threes. ⅓ of patients improve, ⅓ stay the same, and ⅓ have worsening of symptoms. Much of this can change after delivery. Managing of this particular trigger takes time and a good partnership with your neurologist and OBGYN. If this is a major trigger for you, don’t be afraid to ask your OB to coordinate with your neurologist to find the best treatment path for you. And look into some natural solutions you can try to ease these spikes.

While caffeine can provide relief for some people with migraine, one study showed that for vestibular migraine specifically, quitting caffeine improved dizziness in 14% of patients as a solo treatment. When combined with nortriptyline, there was a 46% reduction in dizziness.

For me, it continues to be one of my biggest triggers. I can even tell if a coffee is just regular decaf versus a Swiss water processed decaf because I instantly get a fuzzy, floaty feeling in my head. While 14% isn’t a huge number, when you think about it being the only thing these participants changed, I think it’s enough to warrant a try.

While caffeine appears to be one of most common, it seems many with vestibular migraine are more sensitive to dietary triggers and can benefit from elimination diets. For me, a migraine diet and discovering my personal triggers was what pushed me to 100% symptom-free days.

This is one of the strangest triggers for me, but I find that if I’m holding long, focused conversations, especially when standing, the dizziness seems to creep in. I still can’t figure out if it’s the effort it takes to hold a conversation that is triggering or the focus on someone’s hand motions and moving mouth. Either way, I always found long conversations to spike my vestibular migraine symptoms. Anyone else?

When I was first diagnosed with vestibular migraine, I noticed that being out in warm, humid weather or post workout was when my symptoms would often appear. While it’s easy to blame the workout or the weather, often I think this was due to me not drinking enough water to begin with. Dehydration causes blood volume to decrease, resulting in less blood flow and oxygen to the brain. Some say a loss of electrolytes ignite symptoms as well.

It’s recommended that women drink about 9 cups a day and men 13 cups a day. This translates to about 72-104 ounces a day. I set a goal for myself to drink 4 of my S’well bottle a day back when I had constant symptoms, which is about 100 ounces total a day. With increased water intake, it may be helpful to add in some with electrolytes for every other bottle, like SmartWater (Trader Joe’s has a brand name one that’s less expensive). Or you can just supplement with adding it to your own water with LyteShow.

Scrolling on my iPhone was something I really struggled with in the beginning, and makes me think perhaps I should be doing more YouTube videos (although I found that movement triggering as well!). I often found myself reading online articles in bits at a time and I rarely went on Facebook or Instagram during that period of time.

A few things that do help are dimming my iPhone and computer screen and wearing migraine glasses, but limiting screen time can go a long way! Save articles you want to read and limit scrolling time as you can.

One thing to note is that some scrolling can be good, especially if you are greatly triggered by it. It’s similar to vestibular therapy, where your brain learns to accept the movement without causing dizziness. But just like vestibular therapy, it’s important to no over-do it.

Need to figure out how to manage these vestibular migraine triggers? Here are some posts that may help.